On Friday 10 of us from the Hiking Club took a drive up to Roosevelt Lake to take a guided tour of the ancient ruins above the lake. It’s about a 90 minute drive to the Visitor Center, and it was another great day for a hike. As the location is at a higher elevation than Gold Canyon, we were expecting it to be cooler, but for most of the day it was in the mid 70’s and sunny as usual.

At this location there are two different cave dwellings accessible from the parking area. These were populated by the Salado people from the 12th to 14th century, and then abandoned. The Lower Ruins are visible from the parking area, and available to anyone who wants to walk the half mile path to the site. We’ve been here once before and walked up to the lower site, but didn’t have a chance to access the guided tour to the upper ruins, as you have to book it weeks in advance. Only 15 people a day are allowed to visit the upper site, so it books up pretty fast. Our hike was booked in January by Old Slow Hans who we hike with on a regular basis. He came along to show us the ropes and admitted that he’d been here about a dozen times, but never tires of seeing the ruins.

These are the Lower Ruins, and it only takes a short time to walk up to the site. It contains about a dozen rooms, and was home to about 40 people when it was in full use.

The path to the Upper Ruins travels along a natural spring, that was another reason why the ancient Pueblan Indians chose to live here. The water runs all year and supposedly tastes great. I was kind of surprised that they haven’t routed the path away from the water though, as all the hikers really chew up the wet ground. The spring does seem to keep everything in the area looking pretty healthy. I don’t think we’ve ever seen a Saguaro as dense as this guy. 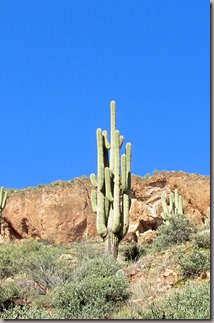 On one of our first glimpses of the ruins we also caught sight of a few Turkey Vultures. At one point there were more than a dozen Vultures and Hawks circling above the ruins (and us). I don’t know if they were trying to tell us something or not.

We were also greeted by this Rock Squirrel on our way up the trail. We’ve been told that these guys will raid your backpacks if you leave them open and unattended.

It’s obvious that the presence of the caves where the ruins are located was the major reason they were built here, but you sure can’t complain about the view. The lake wasn’t a feature in the past, as it’s only been here since the Roosevelt Dam was built just over 100 years ago. Right now the lake is only 49% full, although all the downstream lakes are pretty full from what we’ve seen on previous hikes. It’s about a 600 foot climb up from the spring at the base of the valley so it’s a long way to get water, but there is a small seep of water at the rear of the cave which isn’t producing anything right now, but does support some plant life. The speculation is that it was a consistent water supply when the Salado lived there, but our docent says she hasn’t seen any water there in the 4 years she’s been doing tours. 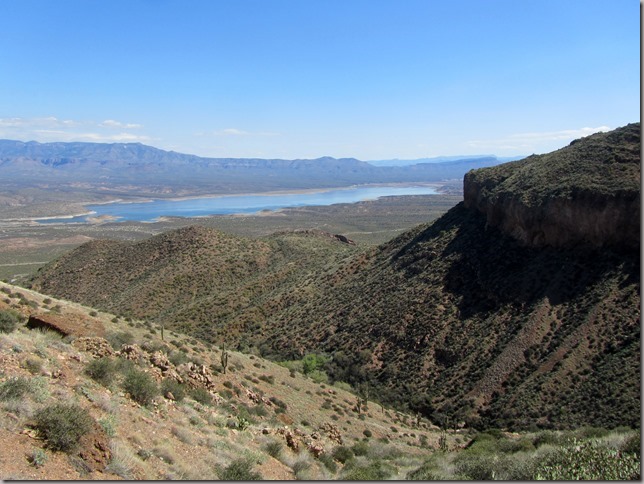 As we entered the ruins we were greeted by one of the Turkey Vultures, who were previously circling above us. He didn’t stick around long, but I do think he wanted us to know we were trespassing. 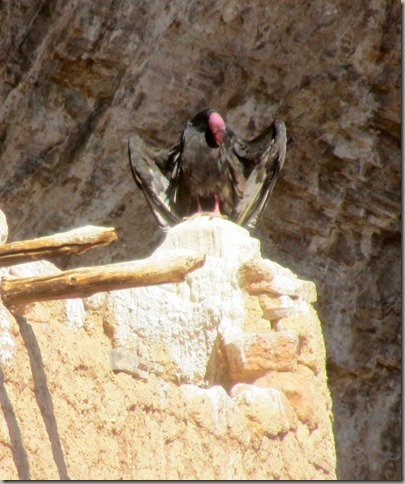 The ruins have not been restored, other than a few re-plastering of walls and supports to sections that are in jeopardy of falling over. There has not been an extensive invasive inspection of the site either in that it has been determined that digging down too deep would undermine the fragile structure. There were approximately 40 rooms at this location in a multi story structure. Somewhere around 150 people lived here.

This isn’t a window, but a door between different rooms in the structure. Everything on the front of this room has collapsed. 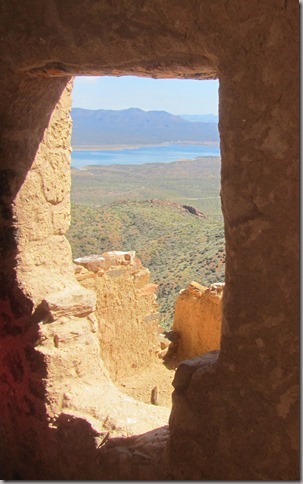 Most of the second story is now exposed and open. None of the rooms were higher than 6 feet tall. The Salado must have been pretty short people. 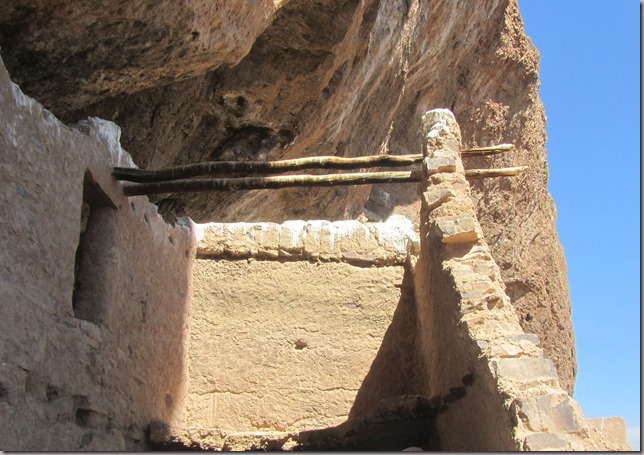 You can’t see the other set of ruins from either location, but both sites had a direct line of site to the area they farmed down on the plain. There is another 15 room Peublo located there, and they speculate that there was some sort of communication link between all 3 locations. It could have been smoke signals, but more likely was based on sound. Being in a depression in the rock allows your voice to carry a long way. 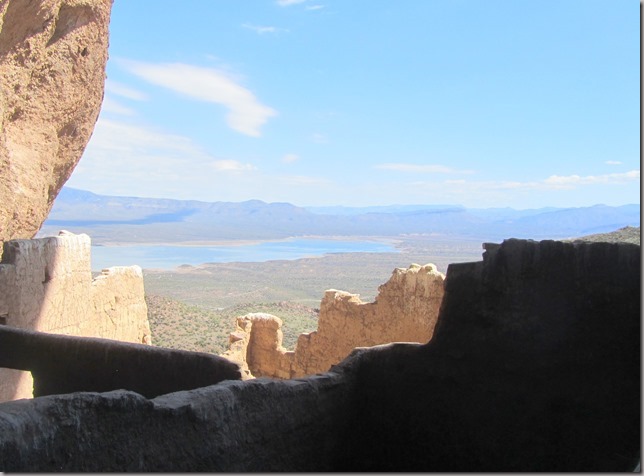 You can see where the buzzards have made their perches over the years. I don’t know if their guano helps or hurts the structure, but they do seem to own the place.

This wasn’t a viewport, but was the spot where a support beam was once located.

We all had a great time at the site. Here’s Sylvia standing in front of some pottery pieces that have been recovered over the years. Our guide, Peg did a great job of showing us the highlights of the ruins and the surrounding area. We’re glad we went.

We got back to the park in the late afternoon, and have taken it pretty easy since then. It’s high time for a catch up day I guess!

This entry was posted in Uncategorized. Bookmark the permalink.

Our travels in our Wildcat Maxx 5th Wheel

So much happening in my life and the world, so many issues to talk about. These are my thoughts and views on some of them.

Retirement Adventures of Karol and Liz

Wandering About With No Supervision

“May your trails be crooked, winding, lonesome, dangerous, leading to the most amazing view.” — Edward Abbey

Junkel Retired and Loving It

Roaringwater Journal
Trippin With The Talleys