Two Days in a Row?

I never thought we were gluttons for punishment but we ended up hiking again today, this time with the hiking club at a location called Barnhardt Trail. We weren’t planning on going on any more hikes with the club this year, but after looking at last year’s pictures of the hike we figured that if we could crawl out of bed at 5:30 and feel like we could function we’d give it a shot.

It’s a hike that’s actually quite a long way away from the park, almost 75 miles. When you consider all the locations we’ve been to are less than 30 minutes from here it was quite different having to deal with almost a 100 minute drive to this trailhead. In some ways it was definitely worth it, but in others, not so much.

The terrain we walked through was very different from the usual desert areas we’ve been in. As we were quite high in the mountains (somewhere over 6000 feet of elevation) there wasn’t a Saguaro, Cholla or Barrel Cactus to be seen anywhere. Instead we were greeted with Pine and Juniper trees and cooler weather. Last year when the club went here, there was snow on the tops of the mountains, and numerous waterfalls. With all the nice weather this year, there was no snow, and hardly more than a trickle of water in the creek. That didn’t stop us from exploring and enjoying some very interesting rock formations though.

There were 27 of us who went on the hike today. As usual I was near the end of the line so I didn’t slow anyone up when I was taking pictures.

There were lots of unique rock formations, some of them very fragile. As I walked past one wall I brushed against a loose rock and a piece the size of a bowling ball fell right off and almost landed on the toes of the hiker behind me.

There were lots of different colours all over the terrain. Some of the rocks in the valley were quite green, but the camera didn’t catch it well.

There were a number of dead trees all over the mountain. With the dry air it takes a long, long time for them to decay. There was also evidence of a fire in the past, possibly from lightning strikes. 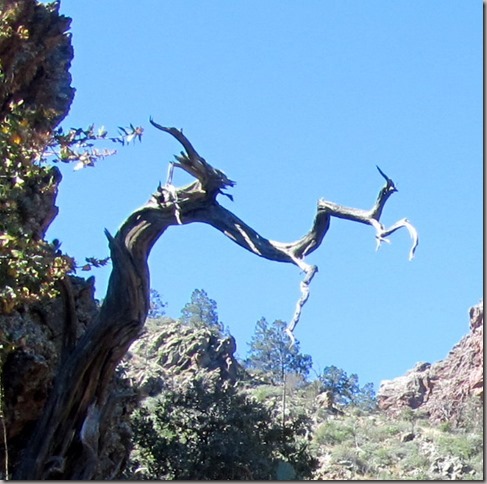 The valley floor below seemed to be a long way away. The total hike was almost 7 miles, and about 1500 feet of elevation gain. A handful of the hikers didn’t make it to the top, and turned back part way. The trail was in pretty good shape and pretty easy to walk on. 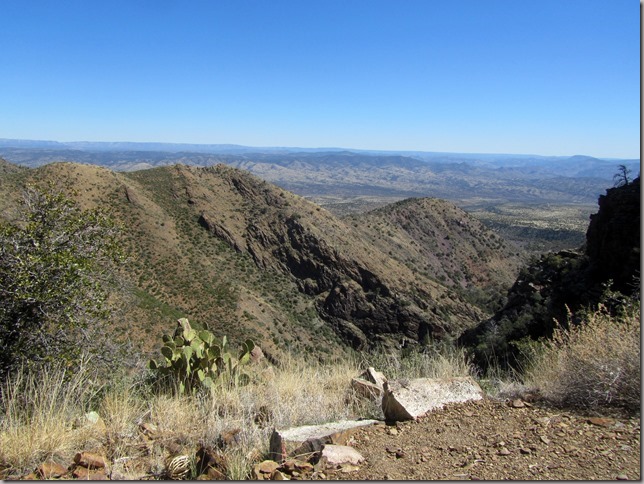 When we finally got to the ‘waterfall’ is was only a small trickle. Nice, but not all that impressive. 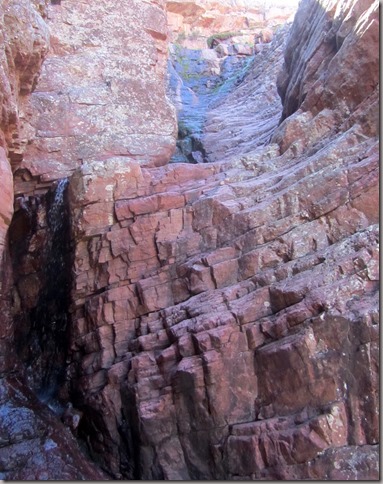 The hedgehog’s were very prolific, and much denser than anywhere else we’ve been. They were nowhere near flowering like they’re beginning to do on the desert floor in Gold Canyon.

The following pictures show various rock formations that have been bent, folded, spindled and mutilated in the ancient past. I sure wouldn’t have wanted to be there when all this solid rock was pushed around like cookie dough. 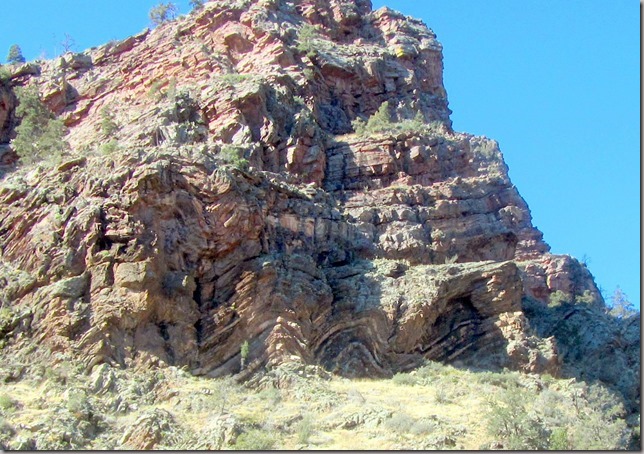 We’ve never before seen a crocus in Arizona. There were actually quite a few different flowers  showing in this area. We did enjoy the different terrain, and as always enjoyed the companionship of the fellow hikers, but we were sure tired when this day was done. The 75 mile drive back to the park was a bit of a challenge, as my passenger kept falling asleep. At least I didn’t!

I think we’ll have a quieter day tomorrow. We certainly won’t be getting up before dawn for a change!

This entry was posted in Uncategorized. Bookmark the permalink.

Our travels in our Wildcat Maxx 5th Wheel

So much happening in my life and the world, so many issues to talk about. These are my thoughts and views on some of them.

Retirement Adventures of Karol and Liz

Wandering About With No Supervision

“May your trails be crooked, winding, lonesome, dangerous, leading to the most amazing view.” — Edward Abbey

Junkel Retired and Loving It

Roaringwater Journal
Trippin With The Talleys